Artificial intelligence is, the machines that has the capability to think for themselves. The machines does all the works which is previously done by humans, like the ability to learn, reason and solve problems. The AI technology is collaborated with the ( IoT ) Internet of Things and has seen enormous growth in the technological field. The intelligence leads the machine to demonstrate or perform better than humans. It was found long back in 1956 at a workshop event but now it gradually grown well and ruling the day to day life, such as Alexa, Google Assistant, Siri etc.

What’s up between this Sanskrit and AI?

Why did it become an issue? Why an ancient Hindu language suggested for the artificial intelligence, the future of tech world?

In 1985 NASA scientists published a research paper titled as Vedic science – ‘knowledge representation in Sanskrit an artificial intelligence'. Mr. Rick Briggs is the scientist, who mentioned that best  natural language which is Sanskrit, for the development in artificial intelligence. Actually he gave his ideas for changing it as a programming language. People says that this was the language used for early Mathematics and science. The Sanskrit grammar is rule bound, formula bound and logical too for Algorithms. More precisely linguistic analysis would effect in artificial intelligence to respond more accurately.

The possibility of using that language is very low . But so many critics have shared their opinion about this, and has become so viral. It’s all started with Rick Briggs article, he shared the view about natural language as the best option for Robots and Artificial intelligence. 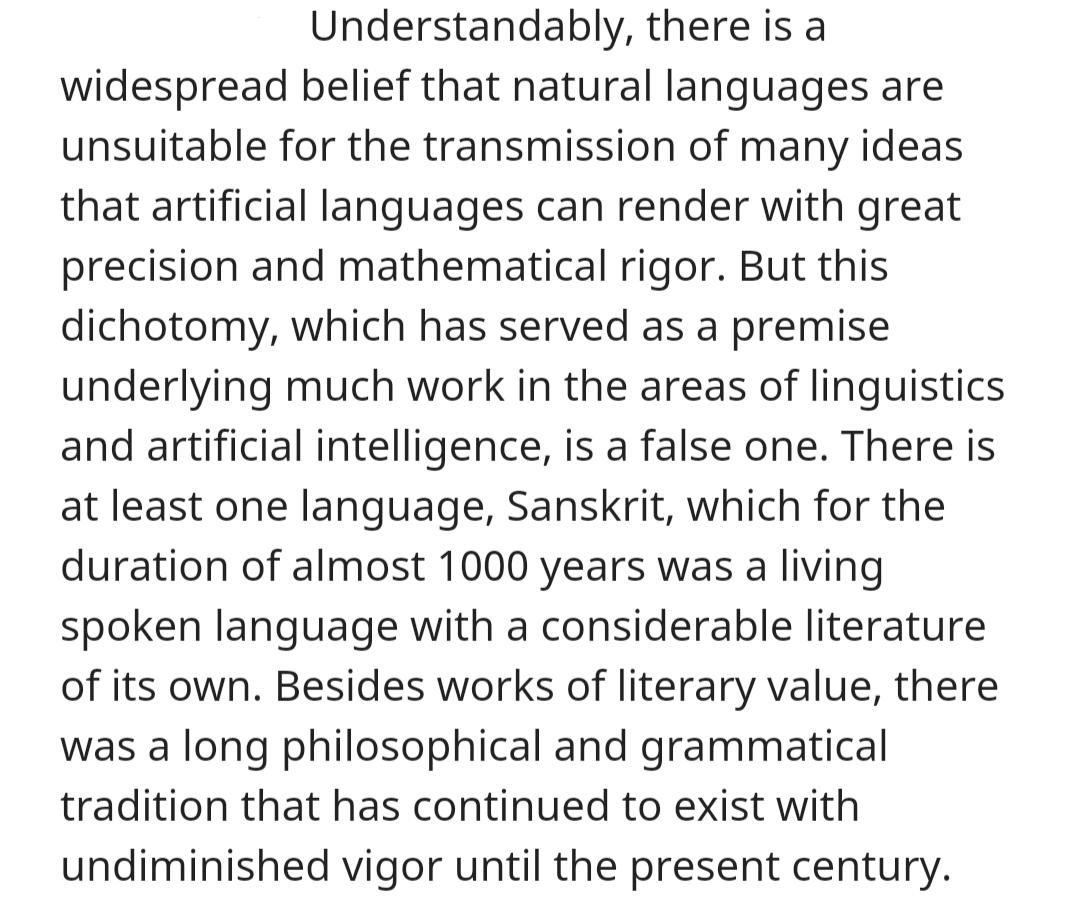 There are more unexpected challenges that we have to face if the language is chosen. As many said, the accuracy of linguist analysts is difficult. The misinterpretation of emotions will be a chaos. If the programming language LISP is not suitable then the Sanskrit converting should have been done soon. Even though this logical connection of Sanskrit language exists, the possibility of conversion is very low.

The research about this topic was being done for more than two decades. The Sanskrit language follows strict grammar rules for the syntax is properly ordered and even if you change the sentence pattern meaning will be constant. Dealing with syntactic analysis made by Noam Chomsky got recognition and the depth study of syntactic structure on the models have been taken into consideration. The Machine language is total different from the human languages but many claim that natural language that is Sanskrit can be modified for the technical or the machine language. The argument of the people were not yet settled. It is keep on rising.  The Fact is there is no official statement given by NASA about this particular issue. They are still working on it. Despite the arguments, many have agreed that this may be suitable as it has “context free” grammar and it’s structure can be easily converted into machine language. There is no practical experiment till now but the verbal statement of many about this issue is more.