As there is no universally accepted definition of its concept, Artificial intelligence is considered a branch of computer science consisting in building machines that perform tasks which are delegated to humans, and which can think and act humanly and rationally. AI is now taking a big part in the world and has become indispensable in relatively every task we need to perform. Well, to name but a few, Phones and computers are mainly the most AI tools that humans use to help them in their daily life. A case in point would be SIRI, a personal assistant which helps the phone user access apps in their phone by a simple click. Self-driving cars are also considered AI machines which fall under the category of Artificial general intelligence and as opposed to the Narrow AI (weak AI), few people use them given their high prices.

Currently, and according to a LinkedIn report, AI is the second most-wanted skill in hiring companies. Companies believe that AI is the future and that it would be good for their business. 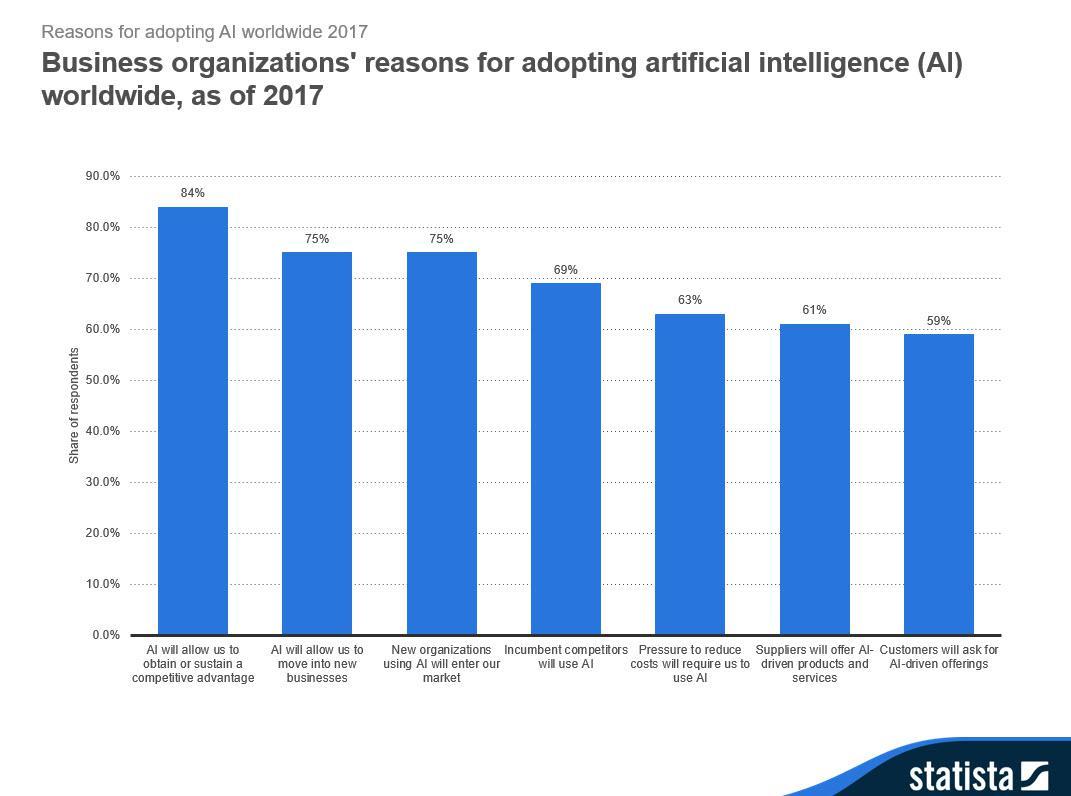 The graph above displays the major reasons why artificial intelligence is opted for in companies. As shown in the graph, 84% of companies believe that AI will create and allow them to sustain competitive advantage. In addition, since reducing the cost plays a key role in the success of a company, 63% see that adopting AI in their business would cost less than a human brain or a human workforce. And of course, the other reason for making such a decision, and which actually sounds logical for the simple fact that we are moving towards a universe which will be relatively ruled by technology, AI in specific, some companies opt for the use of machines because it is the future and people will definitely ask for AI-based or AI driven offerings.

No one can deny the positive impact of artificial intelligence on our world as it facilitated an abundant number of aspects in the life of humans. Nevertheless, the impact of AI on youth life is a question which is raised by the majority of people and even experts. For this purpose, a seminar entitled Artificial intelligence and its impact on young people which was organized by European Youth Center between 6-9 December,2019.

The aim of the seminar was to discuss artificial intelligence and how it controls the life of adults, be they old or young. How young people are connected with the AI was also a topic which was broached in the seminar. The results showed that in developed countries, 94% of young people have access to the Internet while in developing countries 60% of Internet users are young people.

Indeed, these figures can be actually considered a solid proof for the massive use of AI in the life of the young brains. Nevertheless, deciding whether the use of AI negatively impacts the life of youth or not is an issue which requires research to understand the impact of AI.

In fact, though AI is helping humans in their lives, its side effects is the talk of the town in many countries as it is an issue which raises huge concern for both experts and laymen. Instead of reflecting on the benefits of technology and machines in their lives, people tend to speak more  about their downsides and how they affect the life of young people. Computer games are maybe what parents talk about the most as they believe that these consoles are ruining the life of their children. These people also think that these machines negatively impact the person’s behavior as they believe that they become impulsive and they engage in violent behavior.

Besides, people claim that machines will definitely affect the social life as they believe that computer games are the reason why their children are self-isolated which amount eventually to making no friends and having no physical contact with people.

Yet, these claims were false as they were not backed by any scientific evidence, warn experts in The BMJ. As opposed to what parents may think, social networking sites enhance existing friendships and the quality of relationships.

In fact, people should shift their attention away from the impact of machines on youth life and focus more on the use of these machines. As a matter of fact, the use of AI is what matters as humans can make a change if they use AI wisely. In the previously mentioned seminar, it was stated that AI should be used as a tool, not a purpose, that is young people should make use of it to achieve what they aspire.

The use of AI is therefore the key factor to curb the negative impact of technology on the human brain. So, policy makers need to make some measures in this regard with the intention of helping young brains benefit the most from a world ruled by technology and machines. A case in point would be shaping the policies which enable the youth to understand the relation between technology and sectors such as the future of jobs, data protection and the like. Besides, the youth are required to gather some knowledge about the nature of AI, its functions and its limitations.

By understanding AI and its use, young people can be the leaders of tomorrow in technology because even though there are many researchers and experts in the field, AI is one of the most wanted skills as stated earlier. Therefore, AI programs should be launched and must be added to the school curriculum.

For this purpose, and besides their other associate degree program, Intel launched a program called AI for Youth program.

The program aims mainly at familiarizing and empowering students with AI skills. In addition, the program would help young people develop problem-solving, critical thinking and self-reflection skills. In fact, preparing young people for the next era is a sine qua non as living in a world relatively, if not completely, controlled by AI will require people who are highly skilled in the field of technology so that human beings can thrive in a world of AI.

So far, the program is accessible for students in 9 countries, namely: India, Poland, South Korea, Germany, Singapore, United Kingdom, China, Russia and the United States. In these countries, the students of the schools where the program is offered have already started putting into practice the techniques they have learned thanks to the program.

The list of the apps made by the students who benefited from the program comes as follows: 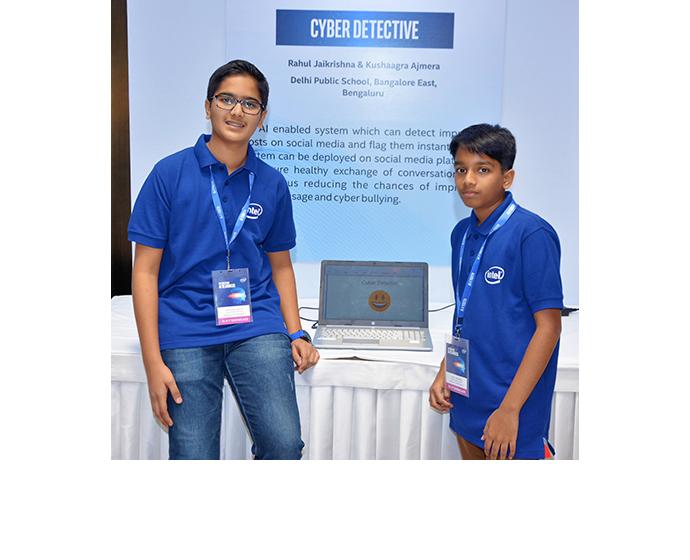 Rahul Jaikrishna, a 10th grader who developed an anti-cyber-bullying app which detects any act of cyber bullying acts against students in the school. The app has reached 80% accuracy rate.

Jaikrishna is another 14-year-old student who made an online diary where students can write their secrets. The app would be of great help to shy and voiceless students in the school as the app would help them express their opinions, make confessions and even share brilliant ideas which they would never share in public.

Hey Teacher! is an app which was developed by four Polish students in November,2017. The app is an artificial intelligence-based model for private tutoring. It helps students reach out to competent teachers who can help them with the subject they want to study depending on their location and the amount they can afford.

The AI algorithm was developed by four students who belong to Computer High School. Energy Guard was made in order not to waste energy which is not actually used. The algorithm turns on and off the energy supply depending on the number of people in a room.

Another AI for youth program was organized in India, namely Responsible AI for youth. It was a national program addressed to Indian government schools and which also aimed at making AI ready which would be of significant help in the development of the country and which would also have a positive impact on the Indian community.

Young people in the AI World

We are indubitably moving quickly towards an AI world, a world where machines are as intelligent as humans and which can perform tasks the human brain can no matter how complex they are, and a world where computers will be more valuable than the human brain and the human workforce. However, it is up to the next generation whether we, humans, are going to benefit from this utter change in our world or we will let ruin their lives

Given that young people are considered technology natives as they were born in an era where everything is performed with the help of technology, they will be held accountable for what happens next because they are the ones who are steering the wheel of technology and  leading the world in the future.

Therefore, it is high time for governments and policymakers  gave access to talented young people. It is high time our governments caught up on the massive changes happening in the world and started considering technology and AI an integral part of our educational system so that they help young students negotiate their way out in the future digital world.

Jonnie Pen states: ‘“The future is bright for young people in AI, as long as they’re given a seat at the table”. Therefore, policy makers will be the one to blame in the event AI ruins human brains and takes full control of our life as long as young people are not given a chance and are sacked from the field. They will also be the one to blame if AI removes jobs of the workforce.

So, countries must follow in the steps of Intel AI program and create new opportunities for young people to enter the digital world because it is a win-win situation because as it is stated by Jonnie Pen ‘Leading firms that provide things like paid mentorship and apprenticeships for young people — especially disenfranchised young people — often find, much to their delight, that the learning happens both ways! Execs learn too. This is called a reverse mentorship,’

As a matter of fact, laymen believe that the world will be in danger if the next generation takes full control of AI and technology in general. Well, a time will come where young people will take over, it is indispensable. Instead, laymen should fear how authorities will deal with young people passionate about technology and eager to shine in the field. Guidance is the key factor which will lead to a technology-based world where humans are of value simultaneously. Orientation plays indeed a crucial role in the future of AI as young brains shall use AI for the benefits of humans because humans are the ones who made those machines.

The good use of AI will not only help human beings live in a developed world, but will also control the potential danger of intelligent machines. In addition, AI can be programmed to be of good use but it can be destructive if its goals and the goals of the user do not align.

With all this being considered, AI-based machines are a human product which is used only to optimize our lifestyle and make their lives easy and it should by any means be prioritized over the human force. So, the manner by which these machines are used and dealt with is what matters and will be the decisive factor in the future. As for the situation of the youth in the AI world, there is no doubt that they will have access to technology at the end of day. So, a full understanding of the AI, its functions and its limitations will not only solve societal, business problems, but it will also prevent future disasters caused by the machine from happening.